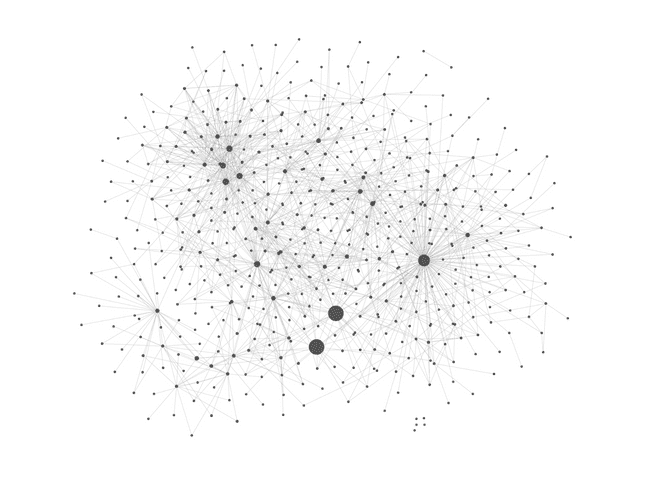 Graph algorithms have many useful applications, ranging from finding the shortest route on a street map to efficiently managing computer networks. These algorithms are an essential part of a standard computer science degree curriculum, so I decided to write down and explain the basics to understand the topic better myself. Here's what I'm going to cover in this article:

A Bit of Graph Theory

Let's start from scratch. What is a graph? A graph is basically just a structure which consists of a bunch of nodes, formally called vertices, and a bunch of lines which connect the vertices, called edges.

Here, we have a graph with 4 vertices (A, B, C, and D) and 4 edges (the lines between the vertices). If we were really picky, we'd say that there aren't 4 lines but 4 arrows. But we'll get to that later. We'll refer to this graph again, so let's call it F.

Definition of a Graph

Let's try to formalise this a bit more, and define a graph G:

Ok, what are we saying here? We have a graph G which is defined by a set V of vertices and a set E of edges. We also have some additional information: E is a subset of the Cartesian product V×V. So by this definition, an edge is just an ordered pair of vertices.

V and E are sets, so we can write the following:

Visualisation of a Graph

We've seen the visualisation of a graph above. Vertices are represented by labelled circles, and edges are visualised using lines to connect the vertices. Note that we have two different kinds of edges:

We use directed edges when we have an edge going from some vertex u to some vertex v but not vice versa:

We have two different types of graphs, directed and undirected graphs. A graph is undirected if, and only if, all of its edges are undirected. Otherwise it's directed. So if a graph has some edge (a,b) (that is, going from vertex a to vertex b), it needs to have an edge (b,a) too in order to be undirected. And that must be true for all edges e∈E.

From a mathematical perspective, it's fairly easy to distinguish between these two types. To this end, we note that E is a binary relation as it is a subset of a Cartesian product. Let's also recall the definition of a symmetric relation:

Let R be a relation on a set A. A relation R is symmetric if, and only if, for every x,y∈A, if xRy then yRx.

This is just another way of saying that for all pairs (x,y) in R, there must also be a complementing pair (y,x). A graph G=(V,E) is undirected if, and only if, E is symmetric.

For directed graphs, we have a bit of additional notation. If we pick some random vertex v, where v∈V, we can write in(v). This denotes the in-degree of v, that is, the number of incoming edges into v. In a similar manner, we also have out(v), denoting the number of outgoing edges from v.

A vertex which has only edges going in but no edges going out is also called a sink node.

A graph is planar if it is possible to draw the graph (formally, to embed the graph in the plane) so that no edges cross each other.

A graph is connected if you start from any vertex and there always exists a path to any other vertex.

This graph is not connected as it has a sink node.

Now that we've covered the basic theory of graphs, we can move on to the next problem: how can we represent graphs in memory? What data structures are suitable?

There are two popular approaches:

Let's assume we have some graph G with n vertices. We can name these vertices 0,...,n−1. Then, the adjacency matrix of G is an n×n matrix, that is, a matrix which has n rows and n columns. Let's call that matrix A.

aij​ is an entry of A, where i indicates the row and j indicates the column. aij​ is 1 if there is an edge which goes from vertex i to vertex j. Otherwise, aij​ is zero.

For our graph F, this would be A, assuming that the vertices are ordered in lexicographical order:

For instance, if our indexing is zero-based, a3,3​=1 since D is the 3rd vertex and has an edge pointing to itself.

Let's take G with its n vertices again. We come up with an array with n entries, one for each vertex. Each entry contains a list of all vertices to which the respective node has outgoing edges too. So an entry is a list of vertices adjacent to the node for which the entry is. 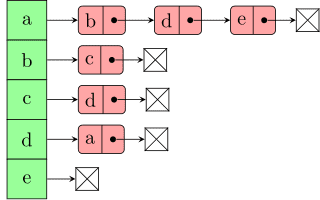 I'll just throw this table at your head; explanations (and a bit of additional information) will follow:

Adjacency matrices have a major advantage that they are very easy to implement. We can simply use a two-dimensional array, or even one-dimensional if we use an injective, or ideally bijective, mapping function.

Given that we have direct access to all entries of A using array indices, we can check very efficiently if, given a pair of vertices, they are adjacent, i.e. there exists an edge between the vertices.

We have an n×n matrix, so the implementation will use up θ(n2) space. So rather space-inefficient in comparison to adjacency lists where we don't have all the zeros of A.

We do have direct access via indices, so we can directly access the row for vertex u. However, we don't know which of the cells of that row are 1 and which are 0. So we need to go through the entire list which is of length n. Worst-case running-time of θ(n).

Similar to the prior section, but now we're going through all n rows and for each row through all n columns. So worst-case running-time of θ(n2).

In comparison to the adjacency matrix, the adjacency list is a more compact way of representing a graph as we don't have all the zeros of A.

The list has n entries and within these entries, all m vertices are split up. So space-efficiency of θ(n+m).

If we want to visit all vertices adjacent to v, we simply index into the entry for v, a θ(1) operation, and go through the entry list which has length out(v).

Good for Visiting All Vertices

We have a faster asymptotic worst-case running-time for visiting all vertices which are adjacent to a given vertex. We simply direct-access the entry for each of n vertices and go along the respective entry list, which has length m in total.

Slow Adjacency Check (is w a neighbour of v?)

Since each of the entries of the adjacency list is an unordered list of neighbours, we need to go through the list until we find w (or we don't, then the check evaluates to False).

In the worst case, we need to go through the entire list. Recall that the length of that list is denoted by out(v). So we have a worst-case running-time of θ(out(v)).

Use adjacency lists unless the adjacency check plays a major role in your algorithm.

Stuff that is good to know but may not be used in my article series about graphs.

Recall that m is the number of edges of a graph G. If m is close to n2, we say that G is a dense graph. You can think of this property like this: a dense graph is a graph which has proportionally many edges, it is well connected.

If m is much smaller than n2, we call G a sparse graph.

There is no exact definition how much smaller or how close to n2 m should be, these terms are usually used when we're talking asymptotically about a graph, checking whether it hast most or few edges. In that context, we'd usually talk about θ(m) rather than m as an exact number.

The Corollary of Kuratowski's Theorem

Kuratowski's theorem is useful when working with planar graphs. The theorem has the corollary that

We can use this to: