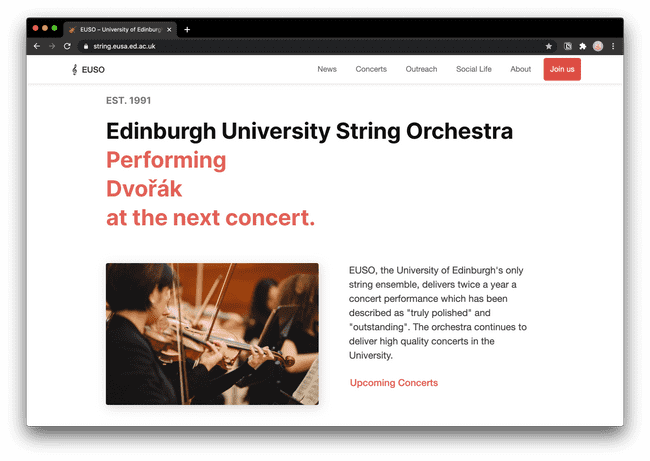 Joining the Edinburgh University String Orchestra was probably one of the best decisions I made since I moved to Edinburgh. The orchestra is famous for its welcoming and friendly atmosphere – this I can only confirm.

Wanting to give something back, I applied for the role of Webmaster and got elected. At that time (around February 2020), the orchestra's website was a simple HTML site. It worked and got its job done but I wasn't happy with it.

These were the three main reasons why I wanted to build an entirely new website: 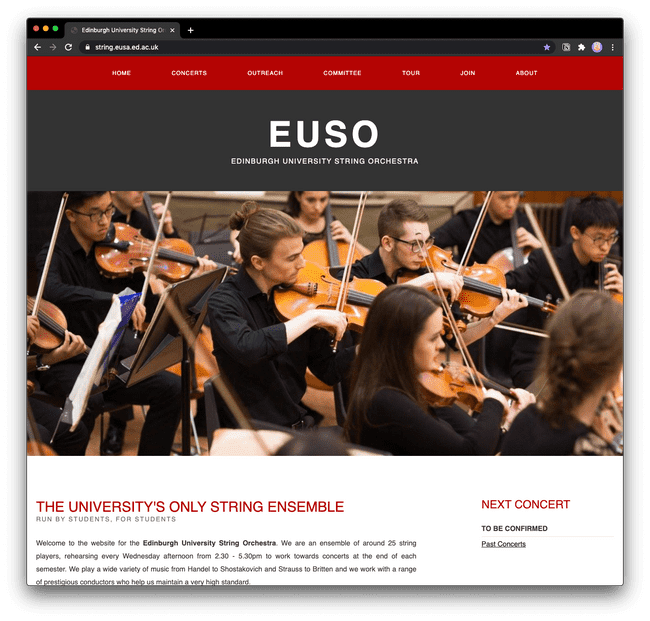 The first step was to gather information on what features the committee would like to see. I drafted a list and divided it into essential and nice-to-have features.

I had to bear in mind what kind of focus group would visit the website. I supposed the group would consist of

The audience I had to pay the most attention to where elderly people. That's why I went for nothing too fancy, a traditional website layout with footer, navigation bar and main content. The only "special" idea was to draft the main page as a page which leads to the most important subpages.

I sketched a few layouts in my notebook (haven't had the time to learn how to use Figma yet) and then I was almost ready to begin.

The only decision left: which languages and tools should I use?

Just having developed my blog, I thought it would be a good idea to use the same tools, especially because I had a good experience using them. This would allow me to reuse some ideas and components.

I'd definitely recommend the combination of Gatsby and Netlify but I was forced to work with cPanel which was fine in the end. I learned how to deploy Gatsby sites on cPanel and even wrote a blog post about it.

I won't go too much into detail since the entire code is open source.

Here are some aspects I'm proud of / which are cool:

It was important to me to make the website as editable as possible, expecting the next Webmaster to be inexperienced in web development (usually we don't have computer science students too often joining our orchestra, and even if, they don't necessarily know HTML or CSS).

The fact that the majority of the website's subpages are going to be markdown pages makes it very easy to change the website content. The only thing which can be tricky is the whole development setup but I figured that I'll be there in person while the Webmaster transition is happening so I can explain everything in detail. So I think I've made it more complicated to get an overview of the entire codebase, but in the long run, it's going to be easier for future Webmasters to make changes to the website.

Looking back to the initial TODO-list, I'm quite happy with the outcome of my development process:

Payments: I was initially planning on integrating stripe in combination with ticketsale in my codebase which seemed to be quite uncomplicated given this Gatsby plugin. After looking at their pricing, I postponed this feature, supposing that it's simply not worth it for us to sell tickets online. A sad thing since I was looking forward to working myself into the whole stripe technology.

Live-streaming: Another feature which I decided to postpone for now. YouTube offers great live-streaming technology + it's for free. The only reasons to have live-streams on this website would be:

Once I had my first release ready, I sent it, published on a test-domain, to our committee. The feedback was positive and they were able to report some minor bugs.

After fixing the bugs, I published the website on https://string.eusa.ed.ac.uk.

I don't know if I'm ever going to need any web development skills at Uni but it was still a good experience and I guess I can never know too much.